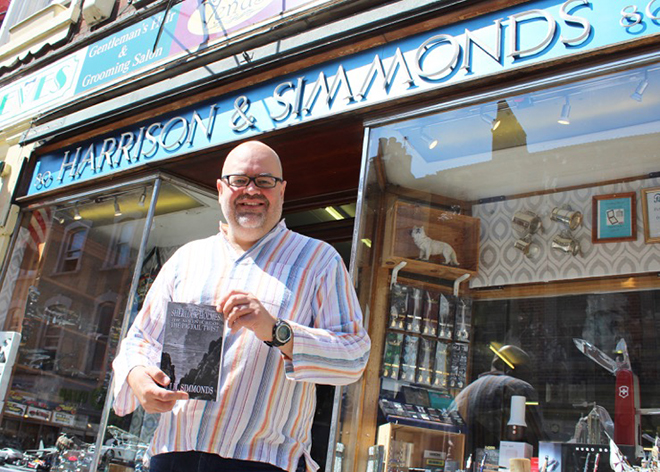 IT’S THE height of fashion… and a long-established gentlemen’s emporium and tobacconist in Bedford is meeting demand from all over the world.

Harrison & Simmonds is owned by the fourth generation of Simmonds – cousins Matthew and Dominic, who are determined to keep the business going until it reaches its 100th anniversary later this decade.

“Brexit has not been a problem – in fact, business is booming online as the ‘hipster’ fashion for a pipe or pocket watch to go with the beard and tweed jacket has taken off,” said Matthew.

“We have been selling across the world for years, There are not many authentic tobacconists left so we are sought out at home and abroad.”

The on-off UK Covid lockdowns have hampered the High Street trade. Particularly damaging was the last minute shut down before Christmas when, like many, Harrison & Simmonds had stocked up, in their case with gifts “for the man who has everything” which have been left on the shelves.

“The government aid barely covers fixed costs and although we to sell in the UK on eBay and we do local click or phone and collect, there are differences in what we sell in the shop compared to online,” said Matthew.

“We are trying to help our regular customers by making some deliveries but if we had not had an established internet following then it would have been much more difficult.

“Luckily we have diversified over the last decade and behind our very traditional shop front is actually a business which sells across the world.”

Matthew is also making a name for himself in the USA as an author.  He has seen his Sherlock Holmes stories promoted in the New York Times, writing three instalment mysteries under dearholmes.com where subscribers receive a letter each month giving clues to a Sherlock-style puzzle.

“It has been a real challenge writing the stories in such a way that each letter they receive gives them enough information but not all the answers,” Matthew said. “They are great fun for the subscribers who enjoy getting an old style authentic letter each month, rather than just doing quizzes online.”

He is also working on a follow-up to his successful Sherlock Holmes full novel The Pigtail Twist, which he set in Bedfordshire and is on sale online and, when open, via the family shop.