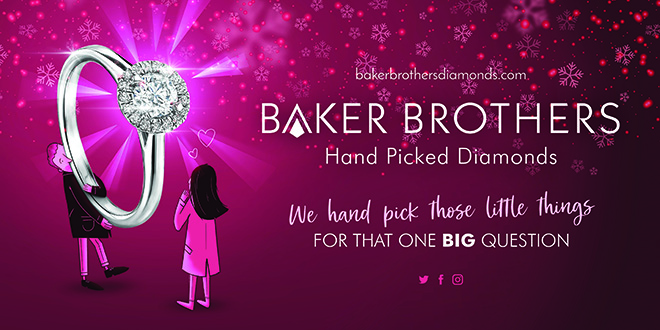 A FAMILY-RUN jewellers in Bedford is celebrating its sparkling success in the Billboards Awards 2020.

Baker Brothers was announced as the winners of the Most Eye-Catching Campaign category in the national awards.

The business, run by sisters Lizzie McAuley and Rebecca Church, was awarded the accolade after the billboard campaign, which featured illustrative characters, was voted the best by the public, including Baker Brothers customers.

It was the first time the business had been in the running in the awards process and follows Baker Brothers decision to take a very different visual approach with their advertising artwork.

“We are delighted to be announced as winners of the most eye-catching campaign in the Billboard Awards 2020,” said Lizzie. “We had not realised we were contenders and had been nominated in the national competition until our customers said they had been voting for us. It was nice to win as we really liked our campaign and it is wonderful to see that so many other people did as well.

The sisters created the billboards with marketing and PR agency Ricket Creative.

“We have had a lot of positive feedback for the billboard campaign, which visually was something very different to what we have done in the past. We worked on the billboards with our agency Rocket Creative to put together the characters that feature in the ten different billboards.

“We wanted to feature characters that meant something to the general public.”

The campaign was something new and fun, incorporating bright colours, she added. “An approach that was very different from the traditional advertising usually seen in the jewellery sector.

“We were really pleased with the results. The characters in the campaign depict different scenes throughout the year, including hand picking a wedding ring, eternity ring, and giving someone a diamond pendant as a present.”

The Baker Brothers team wanted to creatively expand its advertising with an innovative and fresh focus.

Lizzie added: “We wanted to move away from the traditional lifestyle shots typically seen in campaigns and create something a bit more appealing to a younger audience, while not taking anything away from our older generation of customers.

“It was a leap of faith, however it paid off and we plan to continue using the characters throughout 2021.”