Skip to content
22.3°C
16 Aug 2022
x
Latest NewsRegionalMilton Keynes‘It is not easy to play a sport when you are constantly faced with prejudices and comparisons’ 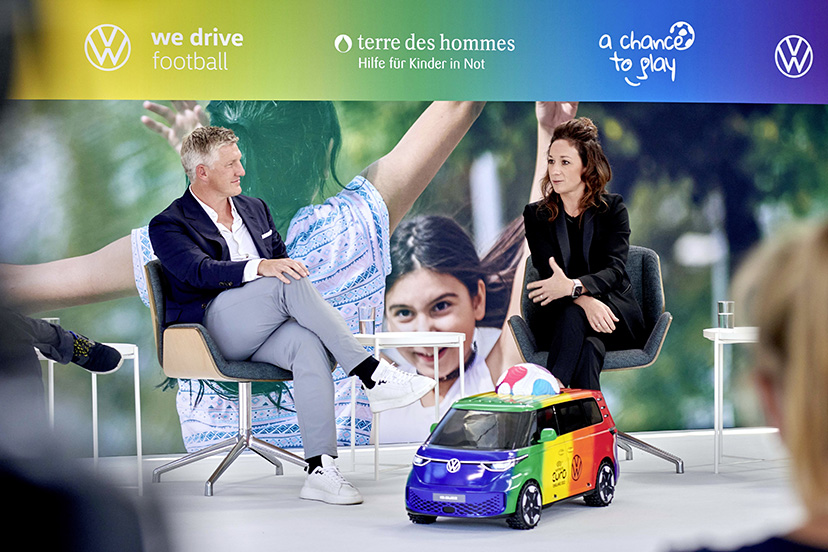 A panel discussion hosted by Volkswagen at its UK headquarters in Milton Keynes discusses equality and diversity in sport and in wider society.

THE SEMI FINALS of UEFA Women’s Euro 2022 begin tonight (Tuesday) when England take on Sweden. Tomorrow, at Stadium MK, Germany face France and both the English Lionesses and the German national team are riding a similar wave of success.

The road to the final in London is a long one but both teams remain on track to meet in the final at Wembley on Sunday (July 31).

As the German ladies defeated Finland 3-0 in their final match of the group stage, vehicle manufacturer Volkswagen hosted a panel discussion on the topic of Equality and diversity in and through sport at its UK headquarters in Milton Keynes. Among those attending were former professional footballers Nadine Keßler and Bastian Schweinsteiger.

“I am absolutely overwhelmed by the European Championship so far,” said Keßler at the start of the panel discussion. The former German international and 2014 FIFA World Player of the Year is now UEFA ambassador for the development of women’s football. “We are investing a lot in football for women and what we are seeing here at the EURO in England is on a different level compared to previous events when it comes to media interest and spectators.”

Keßler views this as an initial success. However, the next step is about building a sustainable basis as reservations about women playing football still exist.

“It is not easy to play a sport when you are constantly faced with prejudices and comparisons. You have to accept that, as a female footballer, you do not get everything handed to you on a silver platter and sometimes have to be a bit louder to make your opinion heard. We are aware of our task and are not only looking at the sporting results but also our mission to battle for equality.”

Corinna Griese, member of the LGBTIQ* and friends network #WeDriveProud at Volkswagen, and CEO of the Football department at Eintracht Braunschweig, is convinced that women in football are generally role models. “When it comes to equality and tolerance, female football players are well ahead of the men. Women, including those in the national team, have come out and many are even married to their partners.”

Together with the 500 members of #WeDriveProud, Griese’s role at VW includes dealing with such topics as coming out at the workplace and in sport, the impact and development of networks, and the importance of role models.

One such role model is British former professional swimmer Michael Gunning. “At the start of my career, there were many who told me that black people could not swim. I should try athletics instead. It took a long time for me to be able to proudly say that I am a swimmer. However, I did not want to be named in the headlines as ‘the gay, black swimmer’. Now I am here and want to help people like me. Hopefully people like me show that it is possible to fight for equality together.”

Corinna Griese also wants to show that it is possible. She demanded that structures in men’s football change. “The problem is often not the players at all but rather the managers and consultants, who advise against coming out.”

The response to footballer Jake Daniels, who plays for Championship side Blackpool and who came out in public in May, has been incredibly positive. “But if there are 1,000 positive comments and three negative, far more focus is still put on the three negatives. Young players need support and a safe environment in order to grow and develop self-confidence.“

Gunning, 28, is impressed by the step taken by Daniels. “It was unbelievable to see how Jake took this responsibility at just 17 years of age. If I had had somebody I could look up to when I was young, my life would have been so much easier.”

Beat Wehrle, programme director at child welfare organisation terre des hommes, is fighting to ensure that young people can grow up and live free from discrimination. “Gender equality is not just an issue for elite sport, but the whole of society.”

The inequalities that still prevail are no longer acceptable. With terre des hommes, Wehrle campaigns for the right of children to a healthy environment and the protection of segments of the population that are discriminated against.

“Girls, boys and minorities often feel invisible and find themselves in a complex loop. For many, violence is often the last resort to make themselves noticed. Sport can often help to break this negative development. It shows them how strong they are and what is possible in life.”

On this basis, the Volkswagen group works council and terre des hommes launched the support programme “a chance to play” in 2010. “The project sees Volkswagen actively assume its social responsibility,” said Daniela Cavallo, chairperson of the General and Group Works Council of Volkswagen AG, in a video message.

This programme focuses on preventing violence, as well as learning and educational offerings in the direct and indirect sporting environment. The collaboration between Volkswagen’s group works council and terre des hommes came into being back in 1998. The Group’s workforces have been actively involved ever since.

In order to ramp up the discussion surrounding the topic of equality, Volkswagen, as official mobility partner of the 2022 UEFA Women’s EURO and the German Football Association, highlighted existing inequalities in football with a campaign in the run-up to the tournament. At the heart of the campaign was the provocative hashtag #NotWomensFootball.

“The campaign is fantastic and an important symbol for equality,” says Nadine Keßler. “We are talking about the same sport, whether it is being played by men or women. It is important to stop generalising football for women and equal rights and lumping them together. They are not the same thing and you can also have this discussion about men’s football. The emphasis must be on the sport.”

This is a view shared by Bastian Schweinsteiger. The 2014 World Cup winner was full of praise for the fine work and positive development that has been undertaken in football for women in recent years. He showed understanding for the demand for greater equality in the salaries of men and women in football.

“Something has to change. Female players in the 1st and 2nd Bundesliga must earn wages that allow them to make a good living. However, that can only happen step by step, if visibility increases and TV and sponsorship revenues grow.”

In order to raise the status of the women’s Bundesliga, Schweinsteiger would like to see all football clubs in the men’s Bundesliga invest in women’s teams. This would help to close the gap to the top teams VfL Wolfsburg and FC Bayern Munich.

A ninth EURO title for the German ladies could be a catalyst to Schweinsteiger’s wish coming true. There is still a long way to go… both on and off the pitch.