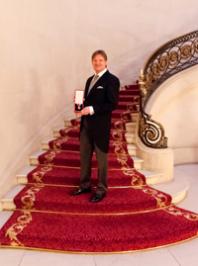 The Director General of the Barnfield Federation in Luton was awarded the honour in the Queen’s Birthday Honours last year for his work developing the Academy Movement.
He collected his medal from HRH the Prince of Wales in the Buckingham Palace ballroom.
“Today has been an unforgettable and truly humbling experience,” Sir Peter said. “The Prince of Wales was both sincere and generous when discussing the achievements of the federation. He spent quite some time talking to me as he did with every recipient. Now that the Investiture has taken place, it feels more real, however I am still a little overwhelmed.”
The Barnfield Federation was founded in 2007 and, led by Sir Peter, became the first further education college in the country to sponsor two significantly underperforming secondary schools, create academies and form a federation.
Since this point GCSE results have more than quadrupled in both academies and from a position of special measures, they are now judged as ‘outstanding’ and ‘good’ by Ofsted.
Last year the Academies achieved their best ever GCSE grades in their lifetime as schools and the College success rates rocketed to 89%, to position Barnfield in the top 4% highest performing colleges in the country.
Sir Peter said: “My ambition is to create the very best education and training opportunities for all young people regardless of where they live – every school should be a great school.  Seeing the difference our schools and college make to individual students lives is the most rewarding element for me.”
He is also the only further education college chief executive to be awarded National Leader in Education status and is listed in the 2013 edition of Who’s Who.