YOU ARE AT: Business MK > News > Apprentice star puts students in the spotlight 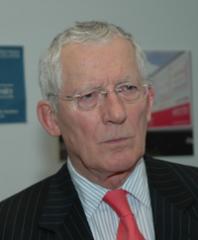 Nick was part of a panel of experts judging business plans pitched by business students from the college and its sixth form MK6 at the MK’s Got Business Talent event on Friday.
He said: “I have listened to a number of incredible, polished and inspirational presentations that frankly took my breath away with their professionalism and I was struggling to criticise some of them – which is unlike me.”
Mr Hewer (pictured) spoke at the event about his personal experiences and achievements of a successful career in public relations and revealed how he worked with Lord Sugar to become the star of The Apprentice. BBC executives were considering several other top businesspeople to front the show at the time.
“I advised him to get the BBC execs out to his luxury mansion and, basically, to lock them up and not let them leave until they understood that he was a natural talent and should front the show," he said. "That is is basically what happened.”
Local businessmen Chris Fry, of recruitment agency Christopher Fry and Associates, and Steve Gasson, of SLG, also spoke to students about their business experiences and made up the judging panel, which had to choose the best business plan from six presented to them.
The winning plan was Healthy 4 All, pitched by students Aaron Hayfield and William Neal. They were invited to be Nick Hewer’s guests at a recording of the You’re Fired programme in London.
Milton Keynes College careers advisor Jen Worby, who organised the event, said: “We were very proud of all our students and MK’s Got Business Talent proved a wonderful, motivational experience for them.
“We were extremely excited to have such a great panel – including a celebrity like Nick – who all gave their time freely in order to help the businessmen and women of the future.”