YOU ARE AT: Business MK > News > All change at the top for property investor

All change at the top for property investor 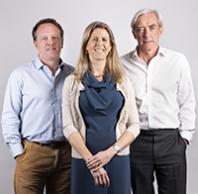 Hugh Elrington is appointed as managing director, Jo Greenslade will focus exclusively on her role as director of strategy and funding and a new chief financial officer has been appointed and will be announced at the end of March.

Guy Brogden will continue to support the business as executive chairman.

Following his first year with Northampton-based Barwood Capital as head of property, Hugh Elrington will take over the day to day operations from Jo Greenslade. He joined Barwood Capital in April last year after spending nine years at Rockspring Property Investment Managers LLP as head of UK transactions.

His brief as MD is to focus on revenue generating activities, developing and delivering Barwood Capital’s property and funding strategies to significantly increase the company’s assets under management and drive the strategic growth and direction of the business.

Jo Greenslade founded Barwood Capital in 2009 and has been its managing director since 2015. Shewill continue to play a key role in the business with responsibility for Barwood Capital’s corporate vision and strategic direction.

Over the last four years, assets under management have almost tripled to some £300 million whilst the company has maintained strong double digit returns to its investors.

In the last year, Barwood Capital has delivered a 16% return to investors in its 2012 Regional Property Fund and its fourth fund, raised mainly in 2017, is now on track to invest in around £200 million of assets, including four development sites in joint venture with British Airways Pension Trustees Limited.

The company is speculatively developing over 740,000 sq ft of logistics space across five sites including one in Bedford.

Ms Greenslade said: “During the last four years we have achieved outstanding growth and I am delighted that Hugh has agreed to lead the team in delivering our next ambitious phase of growth, allowing me to focus on our corporate vision and strategy and on developing strong relationships with existing and new investors and partners.”

Mr Elrington said: “I very much look forward to continuing to work with both Jo and Guy in driving forward the growth and direction of the business over what will be another exciting phase for Barwood Capital.”