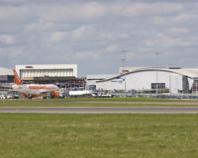 More than 1.2 million flew via the airport in March, bringing the total for the past 12 months to 15 million.

March’s figure is a 15.7% increase on the same period last year, due in part to the airport’s ongoing redevelopment and the launch of several new routes.

easyJet is now flying to Stockholm and the Isle of Man, Monarch is also flying to the Swedish capital and to Porto, while Ryanair has begun operating to Dusseldorf in Germany and Blue Air to Cluj Napoca in Romania.