YOU ARE AT: Business MK > Aviation > Airport boss reflects on a record summer 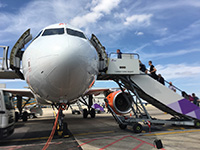 THE 5.3
MILLION passengers who flew from and to London Luton Airport this summer have
set record figures for the airport.

The
number, between June and August, is an increase of 7.3% on last year.

It comes as the airport announces a partnership with the new operator of the East Midlands Railway, Abellio, to bring an express train service to the airport. The service, which will launch in December 2020 and operate from London St Pancras once every half an hour, will cut journey times to the airport from central London.

Sunspots
Malaga, Barcelona, Lisbon and Palma de Mallorca made the top ten most popular
destinations, as did Tel Aviv with 145,000 passengers heading to Israel during
the summer. Amsterdam retained the number one spot though with a total of
198,000 passengers.

London Luton chief
executive Alberto Martin said: “The
summer period is always a busy time for the airport, and this year was no
exception. Our new agreement with Abellio marks a step-change in rail
connectivity between London and its fastest-growing airport, and will deliver
the improved travel experience which our passengers deserve.”