YOU ARE AT: Business MK > News > Airline founder reaches for the sky

Airline founder reaches for the sky 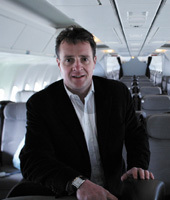 Mr Hunt (pictured) was speaking at a business lunch held at the Holiday Inn, Central Milton Keynes, and hosted jointly by Milton Keynes & North Bucks Chamber of Commerce and the Institute of Directors.

Addressing an audience of owner managers and directors, Mr Hunt said he has launched the airline because the business community was receiving an expensive, mediocre service from other main airlines.

He added: “Having spent a considerable amount of time travelling to the States, I was shocked to see just how much of our profits disappeared in air travel. The service was poor and I was tired of rip-off fares.

“Business travellers should arrive rested and fresh. Thatâ€™s our aim.”

Silverjet has its own terminal at Luton where passengers can check in 30 minutes before the flight. A concierge service looks after luggage and ticketing and a dedicated team manages security.

To improve services, the company asks passengers to list ten things that could be done better. Mr Hunt said: “Iâ€™m proud to say that most of the systems we now have in place are as a result of customer feedback.”