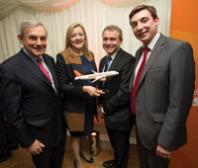 The airline’s UK market director Sophie Dekkers has backed the £100 million plan, which would create 5,000 new jobs, and called for all-party support from politicians to the plan.

Speaking at the easyJet Parliamentary reception, she also called on the government to scrap the controversial Air Passenger Duty levy. To do so would boost the UK economy by £16 billion over three years and create more than 60,000 new jobs.

She told more than 300 Parliamentarians, embassy officials and aviation industry stakeholders at the easyJet Parliamentary reception: “Our industry, and Britain as a whole, needs a clear roadmap for the building of new capacity in the South East.” She urged all parties to support the recommendations of the Arports Commission headed by former CBI chief Sir Howard Davies.

“I will make the case for London Luton Airport,” she added. “WE all hope that there is no delay to this much needed investment.”

The UK has some of the highest aviation taxes in the world – ranked 139 out of 140, alongside Chad, Senegal and the Dominican Republic. easyJet last year joined aviation colleagues at BA, Virgin and Ryanair in commissioning advisers PwC to look at the  APD.

“It is hard to find another comparable table on a key measure of international competitiveness which shows the UK in this position,” said Ms Dekkers. “This is not just a blow to our national pride but demonstrates the unjustifiable level of APD.”

Abolishing the levy would generate enough tax revenue from other sources to give the Treasury a net gain, she added. “We call upon the Chancellor to use the forthcoming Budget to remove APD to stimulate economic growth and to create jobs.”

easyJet has agreed a deal to buy 135 new Airbus aircraft. “We are pleased that the wings and many of the components of these aircraft are manufactured in the UK so this order will safeguard thousands of jobs.”