YOU ARE AT: Business MK > News > Advisers celebrate a hat trick of awards 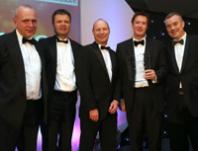 The corporate finance team based in Milton Keynes and Cambridge was named Corporate Finance Advisory team of the Year for the third year in a row and collected the Deal of the Year award for the £25 million sale of Corby firm CRP Print and Packaging Holdings to fellow Northamptonshire paper packaging supplier Smurfitt Kappa.

He said: “It is a real accolade to be recognised for our achievements in this way. As well as winning Team of the Year for the last three years, we have also won the Deal of the Year Award for three out of the last four years, which is an amazing feat.”

Law firm Howes Percival, which has offices in Milton Keynes and Northampton, advised the selling CRP shareholders on the sale to Smurfit Kappa.

Partner and head of corporate Gerald Couldrake said: “This was an important deal not only for exiting shareholders who were realising their lifetime’s commitment to CRP, but also for CRP as the shareholders were adamant that the acquirer had to be the right strategic fit.

"I know that since CRP became part of the Smurfit Kappa group their business has gone from strength to strength. We take real satisfaction seeing a deal have a successful outcome.”

Other recent deals include the £65 milion sale of a dental company and the £15 million of Northamptonshire-based automotive business IM Kelly by Belgian firm ECA NV.

Mr Hughes said: “The market for transactions is strong at the moment and we’ve got some great local businesses as demonstrated in our recent Buckinghamshire Limited report.

"We’ve invested heavily in our team throughout all phases of the market and their experience is reflected in the results we are now achieving.”