YOU ARE AT: Business MK > News > Added value is key, says Sir Digby 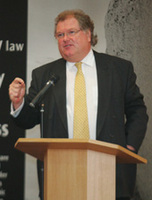 The former director general of the Confederation of British Industry and now the UK skills envoy was speaking to an audience of property professionals in Central Milton Keynes.

He cited the examples of the Nissan car plant at Sunderland, Jaguarâ€™s factory in Liverpool and Airbusâ€™ UK operation as examples of British industry at its most productive.

Sir Digby (pictured) told his audience at Juryâ€™s Inn, invited by law firm emw law: “It is all about added value and innovation. That is the future for a developed economy. We have moved economically into the value-added part of life where we can compete.”

He called for a major improvement in the skills of the UK workforce and for strong leadership to maintain the UK economyâ€™s strength.

“Business can make a difference,” Sir Digby added. “We must not miss the opportunity because it is the future of wealth creation.”