YOU ARE AT: Business MK > Uncategorized > A ‘triffic’ take on health and safety

A ‘triffic’ take on health and safety 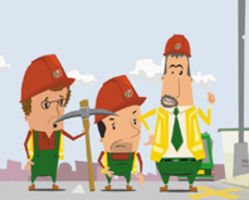 It commissioned the Stony Stratford-based company to create a series of animations highlighting the importance of health and safety procedures which would be shown to employees.

Animation as a form of delivering important messages has already been used in the aviation industry as in-flight safety briefings but Clancy Docwra is the first in the construction industry to introduce it as a method of teaching.

Its effectiveness will be measured as part of an on-going internal process, said a spokesman.

The firm briefed Triffic Films to create an animation that would educate and inform employees on health and safety procedures in a memorable and entertaining format.

Triffic, which is responsible for award-winning animation series such as 2DTV and I am Not An Animal, subsequently developed two animations – ‘Towing – the Movie’ and ‘The Whole Truth About Digging Holes’ – to meet the brief.

Its animators created the characters, wrote the script based on a template of key messages, provided the voices for the characters and even wrote and produced the accompanying music.

The series of clips, titled ‘The Amazing Adventures of Colin, Ted and Baz’ use stereotypical industry characters identifiable with typical real-life personalities. Ted, the supervisor,assumes an authoritative role to ‘educate’ operatives Colin and Baz, of the results of failing to follow standard health and safety procedures.

Clancy Docwra director Seamus Keogh said: "Health and safety within our industry is paramount to the well-being of all employees and the productiveness of work. We wanted to communicate this in a way that will generate interest and have a lasting impact rather than dictate the dos and don’ts of the business through traditional presentations or video."

Triffic director and producer Tim Searle believes the use of comedy will encourage interest into the education and re-education of safety within the group.

He said: "The two scripts we have worked on carry serious messages and highlight potential dangers at work but the comical undertone will encourage people to pay attention, interact and even share with colleagues."