YOU ARE AT: Business MK > News > A perfect end to a milestone year

A perfect end to a milestone year 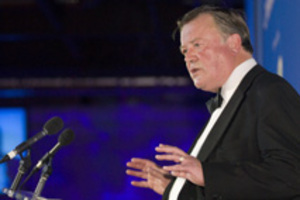 The Royal visit is expectedto take in Stadium: MK, thehub:mk and the new St John Ambulance training centre at Greenleys before the Royal party moves on to Stowe. Buckingham Palace is due to confer city status on one UK town this year and the call from Milton Keynes and North Buckinghamshire business is that Milton Keynes could receive no more fitting award to mark its 40th anniversary.

Milton Keynes & North Bucks Chamber of Commerce president Peter Muir and chief executive Rita Spada both advocated city status when they addressed more than 700 guests at the Chamberâ€™s annual dinner and presentation of the Business Excellence Awards, which were sponsored by Milton Keynes Partnership.

Mr Muir said: “We are terribly proud of what we have achieved and we are looking to the future.” Rita Spada said: “The best gift of all in our 40th year would be for Her Majesty to give us city status.”

Guest of honour at the dinner and awards was former Conservative Cabinet minister Kenneth Clarke. He praised Milton Keynes for its significant contribution to the economy of the South East region and was impressed with the new Stadium:MK.

Mr Clarke (pictured) said: “Milton Keynes is booming, expanding its markets and the people of Milton Keynes are building their businesses at a fantastic rate. I am delighted to see such a fantastic stadium, which epitomises the city that you want to be.”

Business could face a tougher year in 2008 as economic growth slowed, he warned. “Next yearâ€™s award winners will have earned their awards even more than this yearâ€™s,” Mr Clarke said.

He also voiced his criticism of the Pre-Budget report announced by Chancellor of the Exchequer Alistair Darling to Parliament last month. Mr Clarke was particularly concerned at the rise in capital gains tax on the sale of businesses from ten per cent to 18pc, which he feared would deter would-be entrepreneurs.

“It is totally contrary to common sense,” Mr Clarke said.

After his speech, Mr Clarke went on to present a total of 14 Business Excellence awards. They culminated in the announcement of the Milton Keynes & North Bucks Business Person of the Year which went to Julie White. She founded her baby party planning business Truly Madly Baby after her son Samuel was born in 2005 and since then has expanded it to more than 200 consultants across the UK and Europe. She also won investment from the â€˜dragonsâ€™ after appearing on the Dragons Den series on BBC2.

Announcing the award, master of ceremonies and BBC business journalist Declan Currie said: “She exemplifies everything that Milton Keynes is about.”

The most outstanding entry in the awards, which earned the overall Business Excellence Award, went to Energie Fitness Clubs.