YOU ARE AT: Business MK > News > A huge boost for hard-working people, say MPs 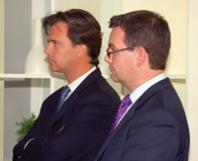 Conservatives Mark Lancaster and Iain Stewart pictured say the budget will take people out of paying tax altogether and help those who want to save for a home and put money away for their retirement.

They say of the main points:

Merging the cash ISA and stocks & shares ISA into a single New ISA with an annual limit of £15,000 This will make saving simpler and more flexible. 1.1 million ISA holders in the South East could benefit from the New ISA.

Abolishing the 10p starting rate of tax for savings income The 10p band will become a zero rate band and will be extended to the first £5,000 of savings income. This will benefit 1.5 million low income savers.

Creating a new pensioner bond that will offer a return that is better than anything pensioners can get now Helping pensioners who have worked hard and saved.

The biggest reform of pensions taxation in a century. This will mean that no one will have to buy an annuity if they don’t want to. There will be no punitive 55% tax rate if you try and take more than your tax free lump sum. Everyone who retires on these schemes will now be offered free, impartial, face-to-face advice.

The proposed Personal Allowance, was revised up from its original increase to a further increase to £10,500, which will lift three million people out of tax altogether.

It was also good news for motorists. The MPs say that the further freeze on fuel duty means that a litre costs 20% less than it would at this time had the then Labour government’s plans come to fruition

Milton Keynes North MP Mark Lancaster said: “This is a great step forward for the people of Milton Keynes. Now they can start to feel the benefits of their hard working and the economic growth and recovery of the city and the UK as a whole.

“The increase in personal allowance will be a huge boon for the local economy, with rate of unemployment for young people in Milton Keynes falling, they will be able to enjoy more of their hard earned income than ever before”.

Iain Stewart, MP for Milton Keynes South, added: “As a city and a nation, we are working incredibly hard and it is now starting to pay off. The savings measures are something I have wanted to see for a while so I was delighted to see them included.

“The increase in the personal allowance will take around 1,000 people across Milton Keynes out of paying tax altogether. This is a very positive budget but it is important we stick to the long term plan to make our economy resilient and successful for the long term.”