YOU ARE AT: Business MK > News > A display to light up the festive season

A display to light up the festive season 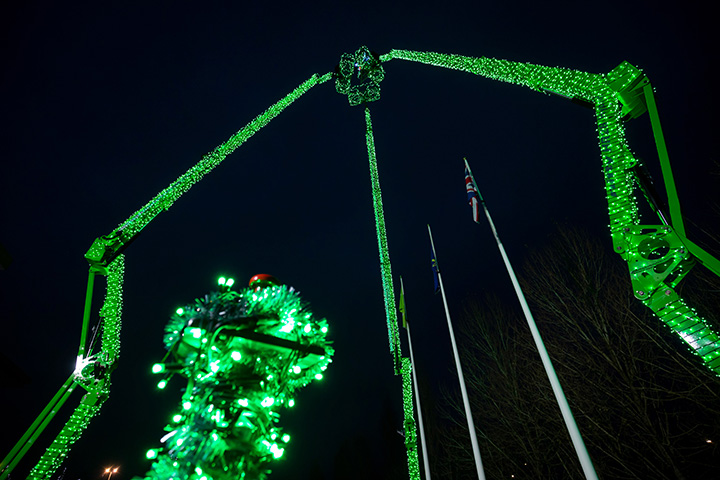 IT’S BEEN lighting up the sky of Milton Keynes this month… Check out the Niftylift Christmas tree, which has been on display outside its Shenley Wood headquarters since the beginning of December.

The ‘tree’ – created by three Niftylift Heightrider work platforms – has become something of a tradition since it first appeared in 2016. The company created the idea to give its neightbours and local community something to enjoy in a uniquely ‘Niftylift’ way.

Standing 30 metres high, the Nifty Christmas Tree is one of the tallest structures in Milton Keynes and with Shenley Wood – where the company has its headquarters – being one of its highest natural locations, can be seen from all around the city.

FACT FILE: The tree holds 1.2 kilometres of lights, with 9,600 LEDs on the tree itself.

The star that sits atop the tree is the most important decoration of all and this year Niftylift’s star uses a state-of-the-art computer-controlled system to display an endless range of colour combinations in constantly changing patterns.

FACT FILE: The star took a special installation team eight hours to wrap and is covered with 6,250 LEDs and a cable run of 625 metres.

Roger Bowden, Niftylift’s founder and chairman, said: “Niftylift has been in Milton Keynes for more than 35 years and during that time we have grown to become a successful and sustainable British manufacturing company, investing in technology and infrastructure and offering many new employment opportunities in the area.

“We want to continue to play an active role within this wonderful community and I would like to wish everyone a merry Christmas and a very happy New Year from all of us at Niftylift.”

It took the equivalent of 72 man hours to wrap the tree and star.

Only 5.5 amps… The total power usage at full brightness.