YOU ARE AT: Business MK > News > £56m retail park funds completion of stadiummk 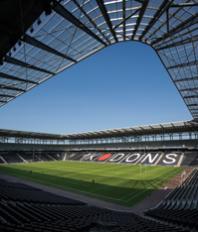 MK1 Shopping Park, next to the home of MK Dons, is benefitting from a £56 million investment by The Crown Estate.
The Shopping Park has been pre-let to top high-street retailers including Marks and Spencer, Primark, Arcadia and River Island with further retailer discussions at an advanced stage.
Once concluded, the new high-quality retail development will comprise 235,000 sq ft split into seven units and benefitting from more than 600 car parking spaces. Construction will start in the next few weeks with completion scheduled for autumn 2012.
Stadium owner Inter MK has received strong support from its public sector stakeholders Milton Keynes Council, Milton Keynes Parks Trust, the Homes and Communities Agency and Milton Keynes MPs Iain Stewart and Mark Lancaster in its bid to secure the retail development.
Inter MK chairman Pete Winkelman said the development was “vital” to the stadium’s development.
He added: “This is a project that we have been working on for over four years and has required a lot of patience, dedication and an incredible effort from Milton Keynes stake holders and I am excited to get this over the line, especially in the current financial climate.”
Milton Keynes Council chief executive David Hill said: “It will bring a significant number of jobs to Milton Keynes and the wider South East Midlands area, boost the local economy and enable the completion of the iconic stadiummk. The MK1 Shopping Park will complement the existing excellent retail facilities within Milton Keynes.
The construction work on MK1 and the stadium will be done by Buckingham Group Contracting, which built stadiumMK and has since created the new Silverstone Wing pit and paddock complex at the Northamptonshire motor racing circuit, Brighton and Hove Albion FC’s new AMEX Stadium and the venue for the handball tournament at the London 2012 Games.
The Shopping Park will enable the important completion of the upper bowl at stadiummk, taking the capacity from 22,000 to 32,000 and allowing large-scale international sports and musical events to take place at the venue.
The upper bowl is expected to open in time for the 2012-13 season.