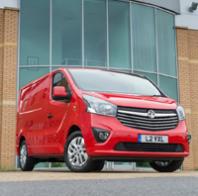 The Luton plant beat world class competition from across Europe to build the new van.

Rival Ford shut its Transit factory in Southampton last year making Vauxhall’s Luton facility the sole flag bearer for UK van manufacturing – on a site where over eight million vehicles have been built since 1905.

The plant is a significant contributor to the local and national economies building nearly a million Vivaro vans since 2001 including 44,000 vans built in 2013.

The factory is a major exporter with 52% of production destined for European markets.

Service firms around the country will also benefit from £600 million of new business over the life of the new Vivaro with 40% of content sourced locally from UK suppliers.  This is up by 60% on the current van.

“The all-new Vivaro van is of critical importance to Vauxhall and its manufacturing facility in Luton,” said Vauxhall chairman and managing director Tim Tozer.

The Luton plant won the contract thanks to the outstanding attitude and work ethic of the workforce, he added. “I’m very proud of the men and women who build this vehicle to world class levels of quality and productivity.”

The new Vivaro was designed by a team led by Luton-born Malcolm Ward.  In his role as Vauxhall/Opel’s design director, Mr Ward follows in the footsteps of both his father and grandfather who both worked at Vauxhall.

Business Secretary Vince Cable said: “The launch of the new Vivaro is great news for British manufacturing. The plant at Luton, which has made such an important contribution to the local and national economy, has got a bright future thanks to the commitment of its workforce and ability to compete against the best in Europe.

“Through the UK government’s industrial strategy, we are backing the auto sector as it goes from strength to strength. We are providing the right environment to give businesses the confidence to invest and create high skilled jobs.”

Len McCluskey, general secretary of the trade union Unite, added: "The new Vivaro is testament to the skills and dedication of the Luton workforce who have once again put together a world class vehicle.

"Not only is it great news for British manufacturing but it also represents yet another proud milestone in Luton’s rich history of motor manufacturing, underlining how jobs and investment can be secured when employers like Vauxhall work closely with their workforce and Unite.

"More investment like this is needed to create the high skilled jobs and security we need to rebalance the economy and bring growth to all."

Also looking forward to a bright futures is Vauxhall’s other UK manufacturing plant located in Ellesmere Port, Cheshire where production of the next generation Astra compact car begins in 2015.

Workers at Ellesmere Port won a similar long term contract to their colleagues in Luton.  The agreement runs in to the next decade and secures a £125 million investment and 1,600 jobs.