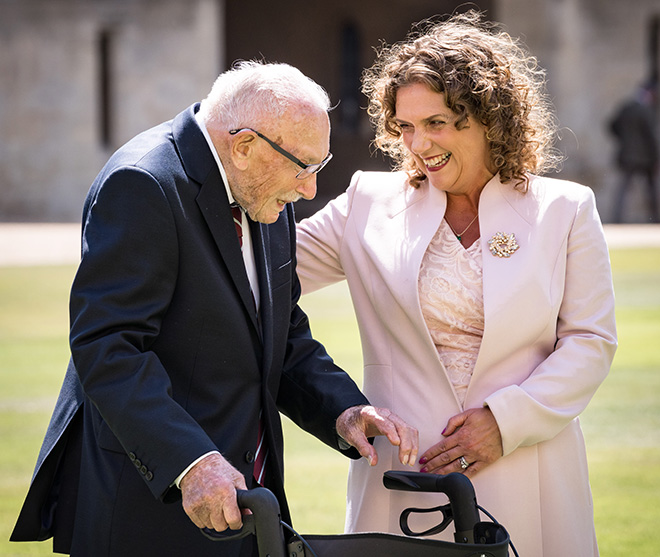 Hannah Ingram-Moore with her father Captain Sir Tom Moore after receiving his knighthood from Queen Elizabeth II at Windsor Castle.

JOIN the daughter of Captain Sir Tom Moore for an exclusive ‘behind the lens’ insight into the biggest charity success story of our time.

Hannah Ingram-Moore has agreed to be the guest of honour at a virtual ‘Audience With…’ event hosted by Willen Hospice.

She and her husband Colin, who are long-time supporters of the hospice, are offering the inside story exclusively to the charity, as a way to support them through the pandemic, the effects of which have resulted in a drastic loss in fundraising income over the summer.

Speaking on behalf of her family, Hannah has promised a private look into how their simple proposition became the story the whole world was talking about.

Captain Sir Tom, who has since been given the honorary title of Colonel, resolved to walk 100 laps of his garden with a target of raising £1,000 for NHS charities. Supporters around the world were captivated and the target was smashed, eventually raising £38.9 million in just four weeks.

In doing so he also broke two Guinness World Records, and was awarded the country’s first individual investiture by Her Majesty the Queen at Windsor Castle.

An Audience with Hannah Ingram-Moore will take place via Zoom at 1pm on August 25 and is a ticket-only event. It is free to Willen Hospice Business Club members, tickets for non-members are priced at £35. All proceeds will go to Willen Hospice to help them care for local people and their families who are living with life-limiting illnesses.

“This year has been unprecedented for us all,” said Hannah. “As a family we could never have predicted how our lives would change in such a small space of time. I think most people think they know our story but really they have seen only a snippet of what happened during just 17 weeks of our lives.

“I am delighted to be part of this exclusive event for Willen Hospice. It will be an opportunity to hear how the fundraiser spiralled into a worldwide phenomenon, how we managed it and how it has impacted on us since. It has been an emotional, life-changing journey and one we are ready to talk about.

“As our local charity, we have supported the Hospice for many years. My family and I are acutely aware of how difficult the Covid-19 lockdown has been for them. We all know someone who is touched by their care, and that is why we’re committed to helping them by sharing our story.”

Willen Hospice chief executive Peta Wilkinson said: “We cannot thank Hannah, Colin and Captain Sir Tom enough for offering us this rare behind the scenes account. We were all captivated by the story and I personally cannot wait to hear more about how his fundraiser took off in the way it did and how we can all learn from it.”